Skip to content
HomeNo Quotes This Week–instead a Photo!! 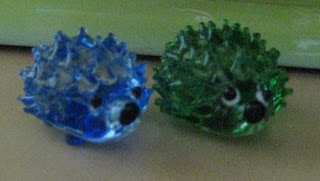 Look at the cute hedgehogs I bought! They’re made of glass and are tiny.

Sorry I don’t have anything unusually random for you this week, suffice to say I was not functioning at 100%. When the politest man on staff ever so delicately mentions that you might not look quite your usual chipper self—you know you’re very ill.

Whatever I had, it appears to have passed in a very brisk fashion, for which I am incredibly grateful. Last Sunday I was the picture of health except for the occasional sniffle, by Tuesday night I was pretty miserable and my memories of Wednesday are almost non-existent. I know I was in bed on Tuesday by 7 p.m. and just before 9 p.m. Wednesday.

Between excessive (for me) amounts of sleep and gallons of liquid (32 oz of hot tea at a time–yay for Nalgene jars), I have been restored to feeling much better. I’m getting a new jar, I think the old one has lived to it’s peak and while I could boil it, I am just wary enough of revisiting said illness to break down and head for somewhere I might grab a new jar tomorrow.

Today was delightful uneventful–I got to watch the Indianapolis 500. It’s the one sporting event each year that I actually pay attention to with any kind of regularity. I grew up listening to it (they didn’t broadcast it in the Indianapolis area except on radio) and a couple of hours of listening to high pitched whine and zoom is familiar and rather comforting. A lot of familiar big family names in the race too, which is a pleasant continuity from a quarter century ago.

So now I’m keeping an eye on Phoenix, which did manage to land on Mars and trying to wrestle a lace pattern into submission with my knitting needles. I’ll let you know who wins.