Wisconsin has it in for me. I moved up here just over two years ago and we promptly had the worst winter the state had seen in twenty years. Last winter was one of the coldest ones–with an actual temperature one morning of -24F. I don’t want to even fathom what the windchill was. All I know is that my valiant car refused to even try and start.

And, in case you’ve missed news for the past few days, we had a blizzard here on Tuesday night, promptly followed by bone chilling temperatures. I went from casual winter gear to the hard core duck fluff coat, chunky weight hat and mittens I got from a ski shop overnight.

Here’s the view early Wednesday, following 11″ of small ice crystals down and while it was still snowing.

The snow has been cleared from the roads, though yesterday morning’s drive to work was quite exciting when I had the audacity to make a right turn. *insert grateful for the fact I got new tires a few weeks ago here* Friday’s commute actually saw pavement and rumor has it we’ll be up to nearly freezing this weekend!

In the midst of all of this cold, I brought home a new bundle of joy. I started considering adoption about five minutes after I moved up here and realized I’d be spending the winter having a conversation with a very healthy spider plant or two. The plants have thrived but they aren’t much for talking back and they are really lousy at snuggling.

Meet Gypsy. She’s between one and two years old. She’s from the Coulee Region Humane Society. 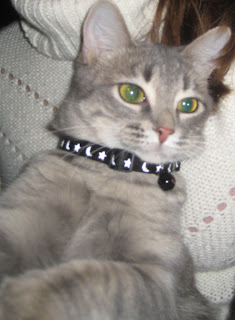 So far she likes to be draped over my shoulder, enjoys belly rubs, and is going to need a substantial clawing/climbing tower. She attempted to jump the height of a five shelf bookshelf last night. She didn’t make it but that didn’t slow her down. Who wants to come over and help me trim her claws?

We still have to go the vet and have all of the usual shots and things and spend a few days getting used to each other. She spent all of last night racing around the apartment, enjoying the fact that she wasn’t in her kennel cage. Today she’s in the bathroom as I realized I’m going to have to further cat proof the apartment. She doesn’t seem especially interested in the yarn stash–yet.

I will make a strong attempt to not turn into a blogger whose only content is to post cute photos of my cat. If I limit myself to once a week, will I be forgiven?