If one doesn’t go to the opening of the vendor booths on Friday night (where I heard they had some FABULOUS food), one really must go on Saturday so as to acquire ARCs and see the vendors before they are all very tired.

I finally checked in at registration Saturday morning, before I even had a cup of coffee! They were out of the signature conference bags and I declined one of the 1.5 inch conference book glossies.  Newly name badged, I managed to run physically into two new acquantainces from the LITA Happy Hour.  I’m continually surprised at how, despite being an enormous conference, it’s really very small and intimate within one’s own circles. I’m in LITA and therefore I tend to see a familiar subsection, many of whom I do or will know online in the future.  Madame Storyteller is well known among ALSC circles. But for the fact we were staying together, we would have seen each other all of once the entire conference. Last summer, I didn’t see her at all–and while I managed to see four other people from La Crosse, I think that was the exception rather than the rule.

The goal wasn’t to seriously load myself up–particularly as this year I was flying, had to ship whatever I picked up back, and I was without the Incredibly-Patient-Mother, who carried things for me last year.  I know….making my mother be a pack animal for me isn’t kind or polite.

Still, I ventured into the fray. I walked through children’s publishers booths, registering what I already had or had on order or wasn’t interested in. I found a number of ARCs that looked interesting. 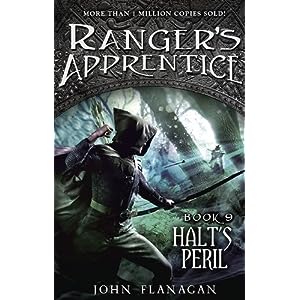 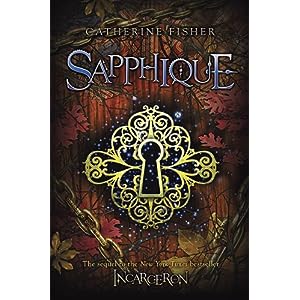 The Branch Princess took Sapphique from me–she’s already read Incarceron while I haven’t yet, so that made more sense.  Plus it meant she got to carry around a big heavy book and I didn’t.

Book Nine of Ranger’s Apprentice though? That was MINE ALL MINE!  *Ahem* to umm, bring home and share, truly!

Many parents have had me fling that particular series at them, with it’s equal gender appeal, strong characters, interesting stories, and gentle easing into the teen section of the library.  On Friday of my return to LSE I handed a mom the first two books on CD for a trip to Colorado–as she was seeking something for her three children to listen to that wouldn’t have romance and wouldn’t be boring.  Crossing my fingers that it works but I have faith in Flanagan and Keating.

I’m actually not caught up on the series, I’m on book six for the audiobooks.  I’d feel a little more guilty but I was haranguing my Recorded Books rep about the fact that book eight didn’t become available at the same time as the print.  And, as a good librarian, I came home and emailed the mom of one of my most diligent readers, who I know just finished book eight. He appeared at my office door within two hours and is under instructions to bring it back when he’s done with it–to be passed to the next eager middle schooler who I will then email.

Oh, I was blogging about a conference wasn’t I?  Sorry…

Right….Saturday.  Vendors.  STACKS of fall catalogs and chatting with audiobook vendors and the makers of the AWE computers and, and, and…. I was pleased that I didn’t have to vehemently argue against standing orders this year. Perhaps the vendors are learning that we like a little more control of our limited funds?  Lunch was definitely a cheeseburger partaken of on the floor next to a YALSA lib.  I really wanted a hot dog but they were out.

I schlepped my takings home (both shoulders had red dents) and unpacked and counted and repacked–I’d gotten from the start of the booth numbering through aisle 3000, more than half way! Changed clothes and shoes and headed to the Midwest Tapes Reception. I put in a lot of orders for the Scrapbooker at Midwest Tapes (though Acquisitions Man has final say) and so I was very happy to go by and partake of their snacks.

Met up with a friend who manages a library in CA and talked about public libraries, recruitment, professional social networking, and what we still had coming up.  We then crashed a table of Queens SLIS students and had lots of chat. A couple of them are working in BPL already, which is great, I hope there’s funding for them to find jobs and continue their work when they are done.

It was time then to meet up for a Tweetup over Ethiopian food.  I’d never had it before and it was delicious! We drank gallons of water with dinner, the spicy sauce was very spicy (even for the non-Midwesterners). It was packed and noisy and there was far too much food, which of course meant we all excessively overate.

Following that, we headed to the Facebook Tweet up. RFD gave us an entire room to ourselves and over yet more food*, there was more meeting and greeting and talking and crazy. I hope RFD had been warned about us coming, we certainly brought plenty of people to the party. Met up with one Head of Circulation who was surprised at the strength of network connections based solely in the online world. He was absolutely floored when people would walk up and begin conversations as though we’d been talking the day before at work, while we’d never actually met in person, usually with the barest of introductions.  I finally got to meet Andy Woodworth and Maurice Coleman IRL, the latter of whom will being coming to LSE at the end of the month!

At the end of a long evening, I couldn’t get a cab,  so I called the Brunette’s brother (he works late) and he “walked” me home. It was only a few blocks and well lit busy ones at that.  Considering that we’d talked at least three times on Thursday for 25 seconds each, it was nice to actually have a full 10 minute conversation not interrupted by my attempts at guessing my travel plans.

*can you tell I was eating quite a lot ever couple of hours?